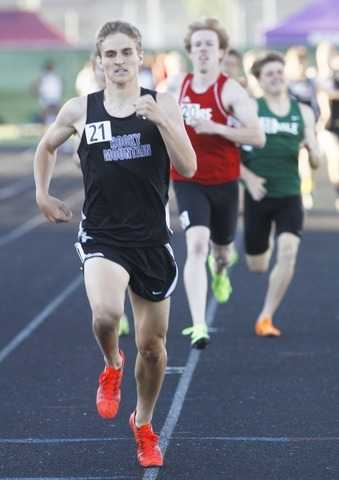 MERIDIAN - From the first blast of the starting gun to the last, records were set at a furious pace on the final day of the 5A District Three track and field meet at Rocky Mountain High.

Ten district records and 16 state-leading marks were established during the two-day meet.

The Rocky Mountain boys collected the most dominant win in program history, winning the team title with 223 points behind nine victories and 21 top-three finishes for their third consecutive district championship.

"It is just a blessing to be out there with these kids. I couldn't ask for anything more," said junior Levi Hagen, who ran the third leg of the record-setting 4x200 relay (1:27.68).

The Eagle girls knocked two-time defending state champion Mountain View off the top of the podium, amassing 150 points to the second-place Mavericks' 118. The Mustangs posted seven wins, including victories in three of four relays.

"It is such an amazing experience, honestly, because I haven't been this high up in the track season before," said Eagle senior Brooke Rawlins, who finished second in the 800 and ran the second leg of the winning 4x400 relay. "Being able to run with my twin sister, especially, and all these amazing girls it is such a liberating experience."

"Our coach always emphasizes just being the biggest track fan that you can be," said sophomore Kylee Coffin, who was a part of Eagle's winning 4x100 and 4x200 relays. "Even if you're frustrated with yourself, always be there for your teammates. I just love doing that."

• Wallin brothers Josh and Jordon put on a show, with senior Josh winning the 400 in 47.54 and junior Jordon claiming the 800 in 1:51.85. Both times rank sixth nationally this season, according to athletic.net.

• Centennial senior Jake Gyer posted the best mark in the boys triple jump with his winning distance of 46-10.5, which also was a meet record.

• Mountain View junior Cambree Harbaugh sailed to a district record in the girls long jump with her mark of 18-1.25.

• In a neck-and-neck race over the last 50 meters, Centennial's Emily Coleman edged Eagle's Brooke Rawlins to win the girls 800 in a state-leading time of 2:16.17.

• Eagle senior Allison Jeffries nearly cracked the top 10 nationally by clearing 13-0 to win the girls pole vault. She added a second district record by winning the 110 hurdles in 14.27.

• In a mad sprint to the finish in the meet's final event, Eagle's James Heckendorn out-leaned Rocky's Josh Wallin to give the Eagle 4x400 relay a victory in a district record 3:20.07.