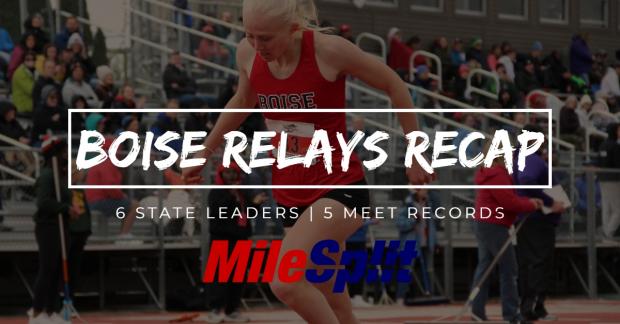 The athletes at the 2022 Boise Relays didn't let the cold and wet conditions put a damper on their performances, producing six new Idaho state leading marks and five new meet records. With conditions being less than ideal, the athletes still managed to produce high quality marks, headlined by a few of the Gem state's best athletes.

Emmett's Landon Helms backed up his Arcadia performance of 14.01 in the 110HH last weekend with a 14.02 Saturday, a new meet record. What makes his 14.02 performance so impressive, is that he did it under conditions that were 40+ degrees cooler than they were at Arcadia, making for less-than-ideal sprinting conditions. While field events were questionable for safety reasons, Helms was able to compete and win both the long jump (21'06.50") and the pole vault, his signature event, with a meet record clearance of 15'07.50". When all was said and done, Helms left Boise batting .1000, going three for three with two meet records.

Nampa Christian's Grady Mylander was a double-winner on the day. In what was a great 1600m showdown between some of the state's best milers, Mylander was able to outlast Matt Thomas and Eli Gregory, crossing the line in a season's best 4:19.29, just off his lifetime best of 4:19.08. Mylander would come back and post a win in the 800m with a new lifetime best of 1:58.36. In both races, he edged Thomas by a combined .25.

Kimberly's Gatlin Bair continues to impress, as his triple win Saturday was highlighted by his meet record setting 200m performance, crossing the line in a new lifetime best of 21.19, putting him #30 in the U.S. Before his 200m win, Bair won the 100m in a time of 10.54, just .04 off the meet record, and also won the triple jump with a mark of 45'11.50". His 200m time and his triple jump were both lifetime bests.

While technically four athletes dipped under the 3200m meet record, it's Blackfoot's Eli Gregory who takes home bragging rights. After finishing third in the 1600m earlier (4:20.32), Gregory came back in the 3200m to finish first with a meet record of 9:26.98.

The throws were equally as impressive as the action on the track, with Rigby's Jacob Womack and Mountain View's Jackson Beck both throwing new lifetime bests in the shot put. Womack, who came in as the favorite, posted a career best 54'07.25" for the win. Beck also threw a career best 54'02.50, both athletes hitting the 54-foot barrier for the first time. In the discus, it was all Brandon Stewart of Eagle, who launched a state-leading throw of 170'09." Coming into Saturday, Stewart's career best was 152'05" the week prior, meaning whatever Stewart and his coach talked about the week leading up to Boise, worked!

Timberline's Ashlyn Sandow prevailed as a double winner in the horizontal jumps. Sandow jumped a new personal best of 36'03" in the triple jump and won the long jump by .50" with her mark of 17'01.50."

Individuals from the Boise girls' team were able to take the win in the 400m, 800m, 1600m and 3200m with wins by Smith, Lydia Nance, Allie Bruce and Annika Zuschlag.