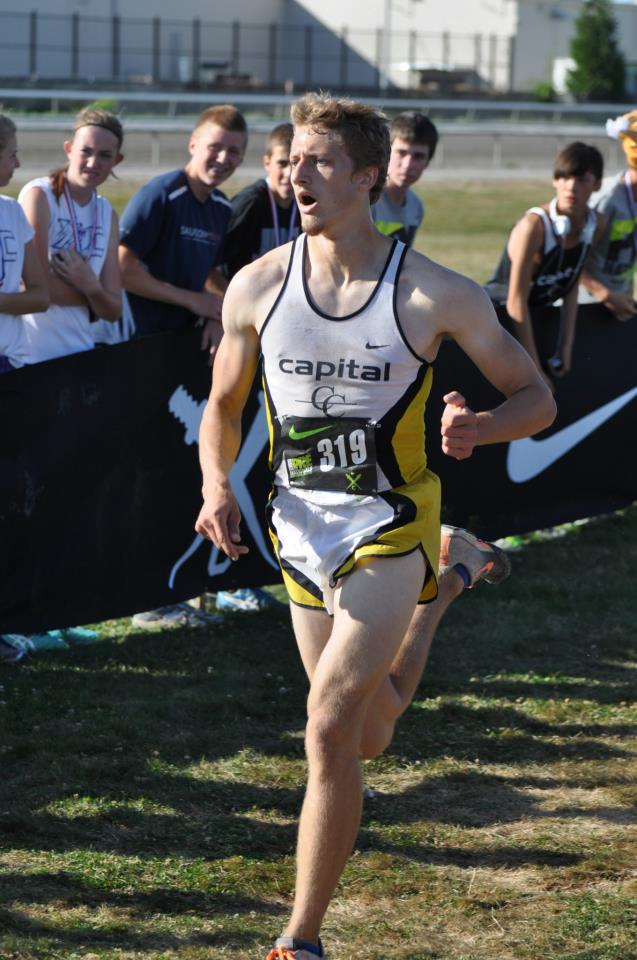 My training for the 2012? Cross Country season started two weeks after the end of the 2012 track season, or the second week of June.

My best race this year? Honestly for me this question is rather difficult to answer due to how well I think 99% of my races went, however I believe my best race would have to go to the Nike Pre-National race held in Portland Oregon. This meet was a new one that our team has never done yet as to years previous, and from what I heard from others before racing in it, was that it is a very high grade meet. This being said, I entered that race with more determination and faith than I think I had ever experienced before, in the which dropped me to the well of my physical energy by the end of it, more so than any other XC meet that I have had past or since. It was special due to the great deal I about myself, and how much it brought our varsity guys team together in support and comradeship, that really paved the way for what we accomplished later that season.

Which course do you love to run (and why), and which one is a thorn to you (and why)?
Of all the courses that I truly love, the one that I probably have the greatest affinity for, is the district course held at Eagle Island. I enjoy the varied terrain there and the spontaneous weather that can spring up at a moments notice. The temperature by the district meet is also just about the perfect temperature that I love to run at.
Ironically Eagle Island is also the place where my least favorite race is held, The Bob Firman Invitational. Although I do love the change in terrain, I do have my limits where this can be too much. this course varies from that of the district meet in that the addition of a steep hill is included, which always follows the long stretch of sand along the beach; this coupled with the high temperatures at the time this meet is held, always throws me off, and I end up doing poorly. Being as rhythmically inclined as I am, I enjoy hard, smooth courses.

My last race, that being the state race held at Hells Gate Lewiston, I suppose can be summed up as simply as epic! Of the three times that I have been to the state meet, the first nor the second, can compare to how ready I was to race at the starting line of this race. I had worked hard running throughout the whole of the summer, and all my races prior was building up to this one race, and nothing was going to get in my way of performing to the best of my abilities and to just go out there and race! I'm not sure how many other runners share my enjoyment of the rain when running, but it had been pouring quite heavily the day previous and on through the meet, that set the perfect stage, for a perfect race. I had been proving what I was made of every race that year, and this race was no different, all I did was do as I have always done this season, which was to get out hard, and sit with the guys who run my pace. More or less I just went out on that course to give it my all, being that it was to be my last High School XC race every run. For this cause did I run, and also for the good of the team, because I knew that all the rest of the guys on my team were counting on me, to pull them along and be the example, since I was the fastest on our team.

Are you running indoor?  If so, have you started training (weights, running… ?)
I have not been running indoor, but have continued my training in running and weights outdoors. So I will not be expecting to race in any indoor meets, but this will not deter me from preparing for this coming track season

Between XC and Track and Field it is always a toss up as to which one I enjoy more. Due to the phenomenal XC season that I had, along with the fact that this is the first year in which I have been able to get a good winter base in, since I have not had to deal with injuries, I could not be more excited for this coming track season. Further apprehension of mine, may be due to my performance in the November Mile a week or so after the XC state meet, which is just a fun mile run that a few schools in our district do, to give people an idea of how fast a mile they can run, in peak Cross Country shape. In years previous my main focus in Track has always been the 800, however the 4:24 mile I ran for the November Mile proved that I may have better results in the Track season, if I focused my attention more towards the mile. The only goal I have so far is one that myself and another competitor of mine agreed upon after the November Mile, that come Spring, we would break 4:10 in the mile.

Whats going on with College? As far as College is concerned, I have not put very much thought into it, because I plan on serving a mission first for the Church of Jesus Christ of Latter Day Saints. After of which I do plan on running in college, so where I go will be quite dependent on what kind of running opportunities are offered to me, though University of Portland, Utah state, and BYU Provo sound like very good options for me.

As to what I plan on studying in college, I m yet uncertain to the specifics, but I am thinking on something involving business management and foreign relations, due to my interest in mathematics and language.

What else do you like to do? Other than running I focus on my education in school and simply improving on myself in as many ways as possible, be if physical, mental, social, or spiritual. I have been in the scouting program all my life and am on the verge of receiving my Eagle Scout Award. In addition I enjoy skiing both Nordic and Alpine and love seeing what feats I can accomplish in constructing various arts and crafts.